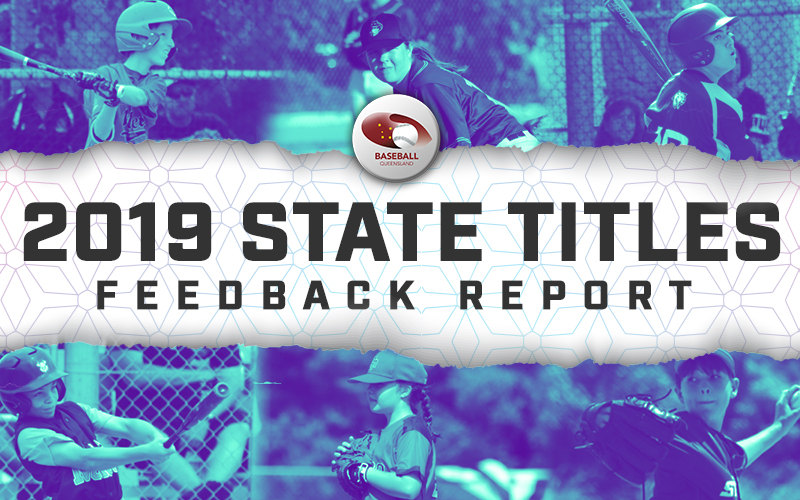 We have gone through the feedback and we’re happy to share the below insights discovered from what was shared. We have also done our best to catalogue the feedback into categories we felt were similar and will share our responses. We apologise if you feel your individual feedback isn’t included in this summery but please know we have done our best to package this information for relevance to our broad audience.

Overall:
We received an 89% positive response to the Overall value of the State Titles

Competition Management:
We received an 85% positive response to how you felt the competition was managed

Value for Money:
We received an 80% positive response to how you felt about the value proposition for State Titles.

Menu Options:
We received an 80% positive response to the menu options available at all State Titles events.

Facilities:
We received an 89% positive response to the facilities used for State Titles. A big thanks to Indians Baseball Club and Wests Baseball Club for their fantastic efforts over the weekend.

The below categories were taken from the feedback for State Titles open question and comments sections. With 141 respondents we have attempted to communicate the information by summarising through specific categories for ease of reference.

1) Lack of teams in Division 1 competitions.

We would like to acknowledge that there are ongoing conversations at all levels of the sport that identify the costs of participation as a barrier to participation. While we are acutely aware of these pressures we also have a clear understanding of the expectations and obligations in hosting these events. From event set up costs to transport, equipment/tools, software packages, first aid, consumables, the list is extensive. The answer has to be for all parties to leverage sponsorship to offset the costs of delivering these events to the standard our members have come to expect. Hosting agreements with funding bodies like Councils and Government plus sponsorship are some examples of strategies BQ has employed to help alleviate the costs and add value to these events. We will continue to work at growing this portfolio of support but in order to have more appeal with potential sponsors and funding bodies we need more participants at respective events. This is why we will move in the future to include competitions for other age groups that we can host at the same venue as part of the event.

Secondly, we would also like to encourage all families to discuss fee structures and value propositions with your Region. In most cases, your Region provides more than just a participation opportunity at a Tournament. Regions generally need to provide uniforms, they deliver a training package in the lead up to your respective event, they need to outfit their volunteers, again it can be an extensive list. All these things add to expenses the Regions incur. The BQ component of fees for tournaments like State Titles does not vary from Region to Region and we do our absolute best to keep costs as minimal as possible without jeopardising the quality of the event. All Regions are also provided oversight of BQ event budgets for State Titles events.

It has been brought to our attention that teams within the division 2 State Titles had players that could have easily performed well within Division 1. Whilst there were quality recommendations shared within the feedback BQ believes that this is a direct response to the lack of teams in Div 1 and will make the priority of helping regions continue to be represented in Div 1 competitions before making efforts to restrict the level of excellence in Div 2 competitions. Additional qualification restrictions on the eligibility of players for Division 2 State Titles may make it harder for Regions to enter teams and lead to players missing out on an opportunity to play in Regions with fewer numbers.

We received feedback that it would be great to have MVP awards be given after each game. While BQ thinks this is a great idea and will look at how we can feasibly make this happen in the future for the Division 2 competitions. With regards to the Division 1 Youth competitions, Little League Regulation XII specifically prohibits the distribution of awards on the basis of comparable skills or accomplishments.

We received feedback that the timing of the delivery of the presentation held at Indians affected the overall appreciation of the event due to the delay of games on the last day. We have taken this into account and will look to host our presentations differently for 2020. With Division 1 games being played to innings limits instead of time limits (in accordance with Little League International Rules) the conclusion time for these games is unpredictable. This makes it harder to schedule an all-in-one presentation for the entire event that shines the spotlight of our community’s attention on the performances turned in at all levels of competition – one factor we would lose by dividing the presentations for various age groups. Another consideration is that in line with feedback previously received, we try to avoid using public address systems that detract from the atmosphere of a final or Championship game while those games are going on.

The amount of shade and the number of toilets at State Titles was a concern for the majority of respondents We will continue to try our best to work with Clubs/Regions and sponsors to increase shade options for 2020. Wherever we identify shade may pose an issue for us at an event we will continue to make the community aware via social media etc and recommend spectators bring any shade they may require. This allows us to prioritise the shade assets we have to cater to the participants/athletes. We will also look at avenues if needed at future events to ensure we have a more appropriate amount of toilets for our events but will continue to attempt to balance that with the potential impact that may have on the cost of the event

We received feedback in regards to communication from BQ to individuals.
BQ recognises and has started to put into place processes to ensure communication around details for the State Titles continues to improve. We are currently working with Regions and other Sports organisations to provide a 12-24 month schedule for State Titles.

We are also committed to continuing to improve our State Titles experience digitally by continually sharing scores and photos. We are also looking to continually provide more creative ways to communicate what is happening in real time.

Communicating competition structure (Draws, presentations, lunches etc) relies on a lot of external factors yet BQ is continually committed to improving the speed and decision-making process to help get all the information into the hands of everyone involved.

Possibly the largest topic of feedback was the limited amount of days of play for the Div 2 Little League state titles.  BQ would like to acknowledge the issues around player welfare (in particular players getting tired and quick turn arounds), Pitching restrictions, usage of the tee and number of players allowed on the field have all been heard.

While the pitching restrictions, that are based on evidence produced by leading experts in the industry will only be changed in response to any changes made by those recognised leaders, one option to offset the fatigue experienced is to increase roster sizes to allow teams to carry more pitchers on their roster. As always, any roster expansion needs to be tempered against participation opportunities and expectations.

Use of the tee remains a common topic of discussion, yet from observation, it continues to achieve the intended outcome. The Tee is not intended to speed up play. The tee is intended to provide the batter with an opportunity to rehearse a skill the game seemingly suggests they may be deficient in while providing the defence with the opportunity to make a play rather than stand idle, watching a batter walk.

We are excited about how our Division 2 State Titles will continue to progress and what has been shared has been extremely helpful in pointing us in a more progressive direction for the future of the tournament.  The rules feedback and what has been stated above will be discussed at length with our Regions and we will aim to share our conclusions once set in place for 2020.

BQ has received your feedback about umpiring and opinions on rules and will be sharing this with the QBUA. It’s important to note that much of the disparity between what gets called in any given game and what the community sees or expects, lies in a refusal to accept some unavoidable truths; that the strike zone is not defined by landmarks on the field, rather it is defined by the perception and judgement of the Umpire on the day. This means it will change, Umpire to Umpire and sometimes day to day. Exploring the parameters with the objective of defining this is typically one of the tasks assigned to starting pitchers. Most youth pitchers don’t have the command to effectively execute this task, so we ask the Umpires to expand the strike zone for the benefit of the game.

We also received feedback and opinion on the bat ruling that occurred in the gold medal game for Division 1 Junior League. Here is a summary of what occurred and what we have learned from the event:

Little League playing rules also impose further automatic penalty:
For the first violation, the offensive team will lose (Umpire to eject) one adult coach for the duration of the game.
The illegal bat is to be removed from the game.
All of these penalties were invoked.

On review we have discovered there is an additional tournament rule to be considered in future also. The Little League Tournament Rules demand the Manager of the offensive team and the batter who violated the rule are to be ejected along with one adult coach.

In any case, the eventual ruling and penalties applied during the game were not protested prior to the next play and as such, the ruling on the field stands.

Lastly, we received a large amount of feedback that shared positive opinions on the event, the facilities, the food and the experience children had. The amount we received reflected the percentages of positive selections made when sharing feedback on the 1-to-5 questions.

Hearing such positivity around the facilities, the volunteers, the canteen workers, umpiring, social media coverage, quality of coaches and support staff and general gameplay helps us know that there is plenty that we are getting right, as well as the specifics we can continue to work on.

Again, thank you so much for your feedback. In everything we do Baseball Queensland aims to create a better future for baseball and we recognise that you, the parent, player, coach, umpire and volunteers all play significant roles in helping us collectively achieve that goal for the future of the game.