Around the Horn: Female Edition 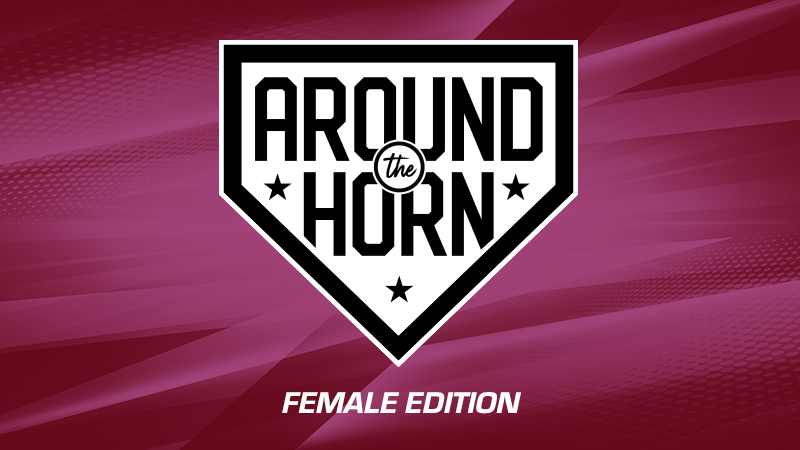 Welcome to the second article in Baseball Queensland’s new series, ‘Around the Horn’. The aim of this series is to bring our state organisation closer to the people and communities that connect us all together: our clubs.

Our Greater Brisbane League is finally here and with a new season comes new teams and plenty of new female players.

Two particular clubs in the GBL are leaving their mark on the world of baseball in a fresh and innovative way. Western Districts Bulldogs Baseball Club and Carina Leagues Red Sox Baseball Club are paving the way for women this season by including all female teams in their club. Wests have joined forces with 16 of the brightest 14-year-old players and the Red Sox have formed a powerful Division 4 women’s team to compete alongside the men in the rest of their league.

Western Districts Bulldogs Baseball Club is located in Darra, a prime catchment area for attracting new players to the well-loved club from far and wide. Long term, devoted West’s player and coach, Brad Schneider has found the perfect way to do that with the inclusion of his 2018/19 U14’s girl’s team. With players traveling from up to 25km just to be part of this team, it’s safe to say that Brad and his assistant coach, John have their hearts in the right place with this young group of girls. You can rest assured the players love it for more reasons than just their bright pink playing shirts… 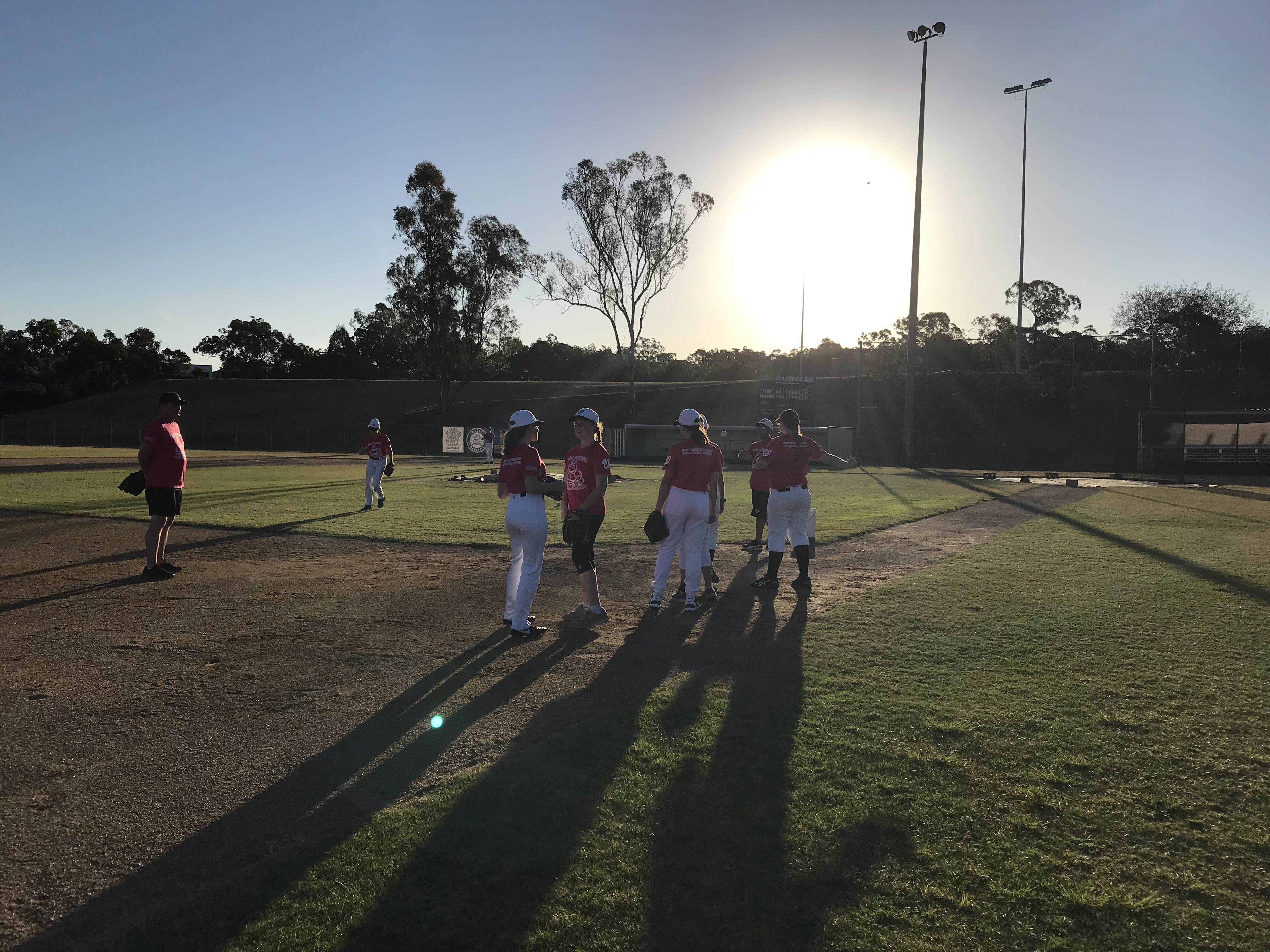 Head Coach, Brad Schneider and Assistant Coach, John Pickford spoke with me at their Tuesday night training session to talk through the birth of West’s inaugural U14’s girl’s team, as well as the core values and morals they are both installing into the young athletes at Wests.

What is your background with baseball at Wests?

Brad:“I’ve been playing/ involved with the club for about 25 years. Back in the day, I played my way through all 3 grades, starting in C Grade and moving my way up. Even back then we had volunteers putting back into the game and I’ve been really lucky in that sense to be able to now put back into the club and help out with the juniors. I’ve been involved with the junior programmes for a few years now. I’ve got kids here that I’ve coached as they’ve been growing up and they’ve now made our senior teams- that’s pretty cool to me. My son plays here as well and I’ve taken a step back from that team and decided to take on the girl’s team this season.”

How did this team come about?

John:“It’s grown from a small 10-week workshop we did with female players to a group of 16 girls wanting to play on this U14’s team. About ¾ of the team hasn’t played baseball before, we’ve had some girls come from different clubs to participate in this new team and we get to coach them through a really prominent time in their life. We’ve been talking to the parents too, the key thing we’ve found with coaching these girls is that we need to be in close communication with the families to ensure that we aren’t taking up too much of their school work time but having them still know that this field and this team is their safe place to come and be themselves. If we can help develop these girls and guide them on the right path then they will take care of the rest; they are so supportive of each other. We are all about the girl’s developing their skills, it’s building their social awareness too because there is so much bullying that goes on now, we are really big on this being the area that they can be themselves in.”

Do you have any particular goals for your team this season?

Brad:We are going for little milestones at a time. A win isn’t even on my radar at the moment. We are going to reach a new milestone each week and move up from there. A lot of our team hasn’t played the game before so us coaches haven’t set unrealistic goals; we are expecting them to have fun and to bond as a team. There is a big growth for baseball in the country right now, so hopefully other girls can see this team and then join their local club and play too!

How do you think the team will go once they are up against the boys in the GBL?

John:(laughs) “That’s the big question! We’ve had a few scrimmage games with the younger boys at the club and they cheered each other on and overall the confidence level was fantastic. They know that we only expect their personal best, as long as they are happy and having fun then we have done our job! Even though a lot of our team hasn’t played baseball before they are all very athletic so I think people will be surprised when they see them play!”

Brad, as someone who has been part of Wests for so long, what are some of the club’s biggest values?

Brad:“At the end of the day we are a working club, it’s nice to have great facilities but we really work together as a club and get things done as a community. Our committee over the past few years have put a lot into the club, for 35 years we haven’t had a clubhouse or a functional canteen and now we are getting little instalments to better the club. We will have a big clubhouse-opening day, which will be a great start to our season! We still have guys involved in the club from the Victory South’s days, so we are proud of our history and where we’ve come from and that is definitely something I’m trying to put through to the kids now. We need to respect and value the people who played before us because at the end of the day if it weren’t for the guys before us we wouldn’t be playing on this field we all love so much. We are a club that’s filled with people who just love baseball and maybe we aren’t as well off as some of the other clubs but we sure turn up every week and do what we love!”

John:“As a club we are very respectful. We see kids come from tough backgrounds and if we can drill into our players that respect is the #1 thing than we can all feel equal and comfortable at our club. You do find bullies wherever you are and that’ll never change but we are big on keeping our club respectful and filled with pride.”

Tuesday trainings for West’s U14’s team is anything but boring, players and coaches were all sporting bright pink playing shirts, with music pumping through the air, it was definitely a welcoming environment for new and existing players to learn the great sport of baseball in.

Long time baseball player, Matilda Shepard says, “I love it here at Wests, I love even more that we have an all girls team this season because we are already so much closer than I ever felt when I was part of the boy’s team. We all know each other really well and over the past couple of weeks at training we have really started to bond with each other more. I just moved from another club and here at Wests they teach us so much more technique, which I really love, and that’s what I looked for in a club because I wanted to improve as a player. It’s a really fun team and I really hope I can hit a homerun this season; I was so close last year!”

After being introduced to baseball this year, Elliarna Rein comments on how supportive and welcoming the sport has proven to be for her, “ I’ve never played baseball before but I’m really enjoying training with my friends here. My team is really supportive when I actually hit the ball! They all cheered for me and we do that for everyone; it’s really fun! I hope that our team can keep on being supportive during the season and all achieve our personal goals.”

It’s safe to say that the boys better keep an out on this group of girls because something tells me they could be the team to beat!

When did the idea come to you about creating a women’s team for the Division 4 strand?

“The club approached me last year about getting an all girl’s team together and asked me if I would head up that team; of course I said yes and would work it in and around Bandits as well as a I could. So, I’ll be taking the team for the first 4 weeks of the comp and then when Bandits starts I will be handing over to Mel Hill, who I am mentoring and coaching up to take over this team. I’ll still communicate with her and come to trainings, help her put together line-ups and everything like that so I am still part of it as much as I can be!  Our club is all about growing the women’s game and we struggle in Queensland when we go to Nationals because we just don’t have enough game time under our belts. Other states in the country have women’s leagues so this is about getting our players in Queensland more game time and challenging them by being in the men’s comp.”

What are Queensland’s chances of a women’s league coming to fruition?

“In other states they have their clubs and then women’s leagues that run off that. That is exactly where we want to go with this. It would be great to have every club in QLD have a female team so then we could have our own league that is still club based with community, just like the men’s league. It’s definitely something we are working on and trying to get up and running. The aim is for people to see what we are doing here and then replicate that in their own club.”

Why did you decide to include them in Division 4?

“We tossed the idea around about putting this club in Division 3 but as women we have always struggled pitching wise, at State level and National level and ultimately we wouldn’t have the pitching depth week in week out o play at that level. The more experienced players can work individually on things they have identified to work on and they will still be challenged but the newer or younger players we have coming up will still be nourished.”

What sets Carina Red Sox apart from other clubs in QLD?

“Carina is very, very supportive of women’s baseball and not a lot of clubs around Brisbane are, I’ve found that they are very supportive of women playing in the men’s teams and they are the one’s who actually suggested that we include this women’s team in the league this season. We are very family orientated as well, across the board through Division 1 right down to Little League. I like that we have senior players coming down to training to help out the kids or even our women’s team.”

The Divison 4 team is full of powerful players, both new and existing and through the guidance of Lisa Norrie and Mel Hill, they will, without a doubt, leave their mark on the history of women’s baseball in Queensland.

If you are in the catchment for the Western Districts Bulldogs Baseball Club or Carina Leagues Red Sox Baseball Club, then head down to support them this season; club fixtures will be circulated on team’s social media pages.

If you are part of a baseball club in Queensland and have a story to share, we would love to hear from you; just email Liv at liv@baseballqueensland.com.au to get your story heard! Players, coaches, umpires, families and fans are all encouraged to get in contact!