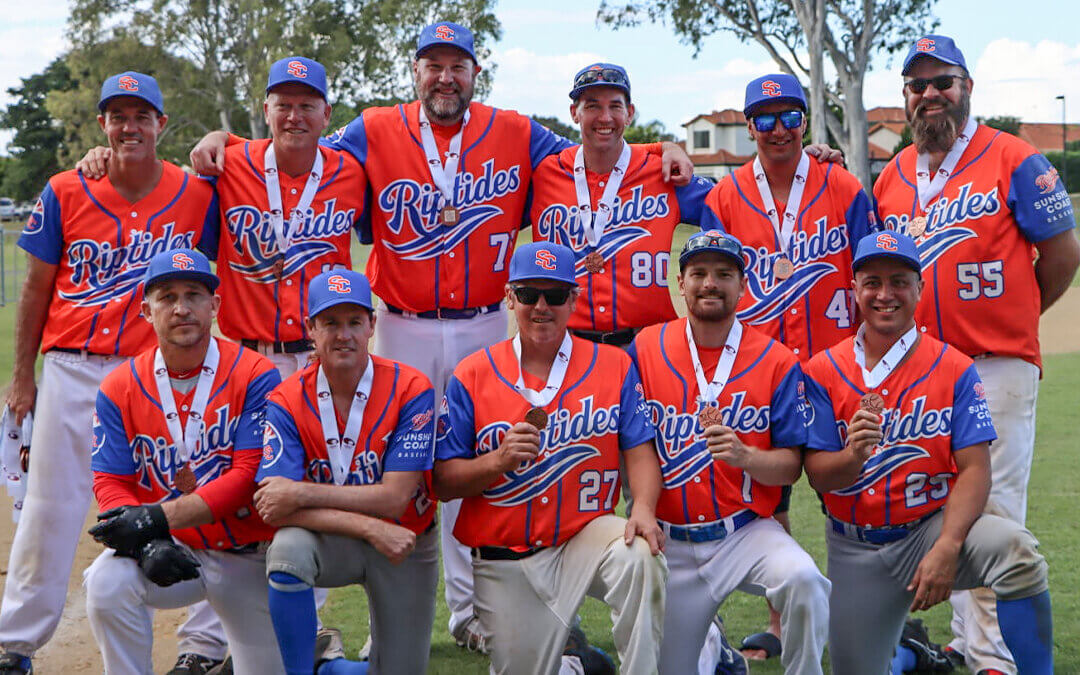 The venue was in pristine condition and many thanks to the Surfers Paradise ground crew for their brilliant preparation.

The first two days; Friday and Saturday saw teams play a single and double header day – often a bit of a stretch for Masters players.

Day three saw the semi-finals games played on Sunday – with games shortened to one and a half hours due to the Anzac Day moratorium for sport being played before 1.00pm.

Day four of the tournament saw the medal games being played with the following results:-

In the 35+ Age Division – Surfers played Good Bunts. In a tight match where the lead changed at least four times, Surfers came away with the win with some strong hitting, driving in the winning run late in the game. Riptides came away with the Bronze medal in another tight game winning by a single run.

In the 45+ Age Division, Surfers 55+ led all game only to see Robina score two runs in the last innings to win the game. Great pitching duel in this game – Geoff Wade vs Vogler & Callihan. Wests came away with a win in the other game taking the Bronze medal.

We were very fortunate to have Surfers State MP – Rob Molhoek and Surfers local Councillor – Brooke Patterson – come along and watch the 35+ Gold medal game and subsequently hand out the Gold and Silver medals for both age groups. Thanks too to BQ CEQ – Gareth Jones for his support and attendance on the medals day together with BQ Director Andrea Marshall and her support across the event.

More importantly the days were spent with good friends, fantastic food from the happy and friendly Surfers Paradise canteen and bar staff watching some wonderful baseball and having great yarns about the “good old days”.

Congratulations to Surfers President – Tony McPhail – for his indefatigable work – both leading up to the event with regard to creating the draw and finalising tournament rules and spearheading his Surfers volunteers in getting the venue in first class playing conditions – as well as his work throughout the tournament ensuring teams played by the rules, the games stayed on time and the grounds were repaired ready to go for the next game.

This tournament is now on the baseball calendar and we do hope that many more teams come along next year to participate.

A great time was had by all!