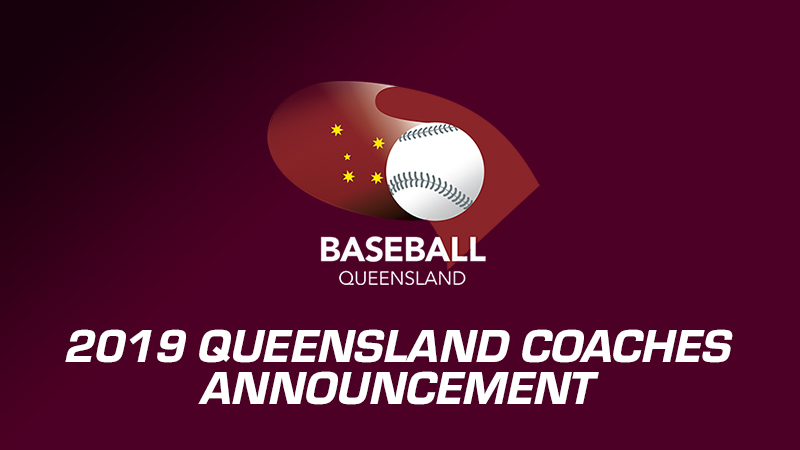 Baseball Queensland are proud to announce the finalised coaching staff for the upcoming National campaigns in 2019.

Baseball Queensland’s Junior Pathways Manager, Shayne Watson revealed that the training over winter has been more intense than ever with a big focus on skill development and on-field participation, “This winter has been a more extensive program with an increase in participation and time on field. The intent this year was to include more athletes in the program by the way of extending invitations to athletes from each region. This program ran twice a week at various venues focused to improve baseball specific skill, game situation and awareness and general physical development. The athletes have been going for a solid 16 weeks and am excited to see how everyone competes during the up and coming State Titles.”

When asked how he anticipates the campaign will develop from last year Watson said, “Following its success last year, the U16 program will continue to compete in the GBL Div III competition. This year we will be implementing a new strategy with this group arriving in Sydney a few days earlier than the expected arrival date. We are in the early stages of planning, but I am in the process of confirming additional games against New South Wales, Country New South Wales and ACT prior to the Nationals commencing. The intent is to add value to the National Championship campaign by adding more games to the overall stay in Sydney. I am excited to see how the teams progress through their preparations and compete at their respective National Championships.”

Baseball Queensland’s Development Manager and coach of the U18’s team, Gareth Jones comments, “We head into this campaign with the same staff that helped us to a silver medal finish earlier this year so that is a strength in itself; having the same group of dedicated, experienced staff with the addition of an experienced program coach and the professionalism of the support staff in place makes for a lot of quality resources available to our team. Add to that the caliber of players available for selection and it makes for an exciting enterprise.

We have reflected on our preparation from last year and we are set to repeat and improve on our successful preparation from last year’s event. It’s exciting to follow the progress of young athletes and see their capabilities improve; it’s always great to play a small part in that. I am also looking forward to the series of games we will play in late December against inbound Japanese teams as part of Baseball Queensland’s partnership with Saitama Prefecture High School Baseball Federation. These teams are always well drilled and very competitive, making for a great addition to our preparation for the National Championships. I’m also looking forward to the tour to Japan we will take in June 2019, ideally with the same group of players to reciprocate the relationship with Saitama.”

The National campaign will run from the 11th-20th Jan 2019 in Blacktown, Sydney. Players and coaches will depart for Sydney on the 9th Jan to begin preparation for the event. Please stay up to date on our Facebook and website as more information regarding the campaign will be announced on those platforms.

Please see the coaches and staff below: