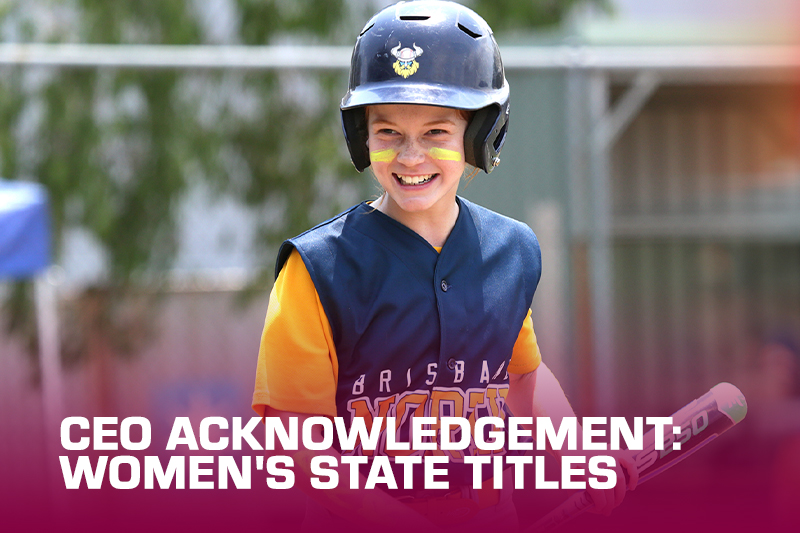 As CEO of Baseball Queensland, I would like to personally thank on behalf of the staff and the board all the players, officials, coaches, parents and families who made this year’s Women’s State Titles a fantastic event and thriving success.

It was a fantastic four days of baseball in Brisbane for the 2019 Little League Girl’s, Youth Women, and Open Women State Titles.

Baseball Queensland would also like to acknowledge and thank All Stars Baseball Club for helping to make the tournaments a rousing success.

Through the collective efforts of everyone involved women within the sport of baseball showcased their talents for all to see.  Thank you to the 232 participants who graced us with your smiles, laughter and love for the game. You continue to pave the way for the future of women’s baseball in Queensland, and that future is very bright.

Some key milestones were the addition of Division 2 to the Open Women’s competition. This increased the opportunity for participants new and old to experience baseball and provided a positive entry into tournament baseball.

We would also like to thank the 4 NSW Country teams that travelled to participate in our tournament. We were thrilled to experience your level of play and spirit in which you played the game.

A special acknowledgement to the Director of the Participation Mr. Geoff Wade, through his initiatives and hard work with his elected sub-committee Baseball Queensland was successful in “Building a Better Future for Baseball”

To reiterate, thanks again to everyone involved in making these state titles such a memorable event for the players and fans alike. We would also like to wish everyone a Merry Christmas, and a happy and safe holiday season. We hope to see everyone back out on the field in 2020! 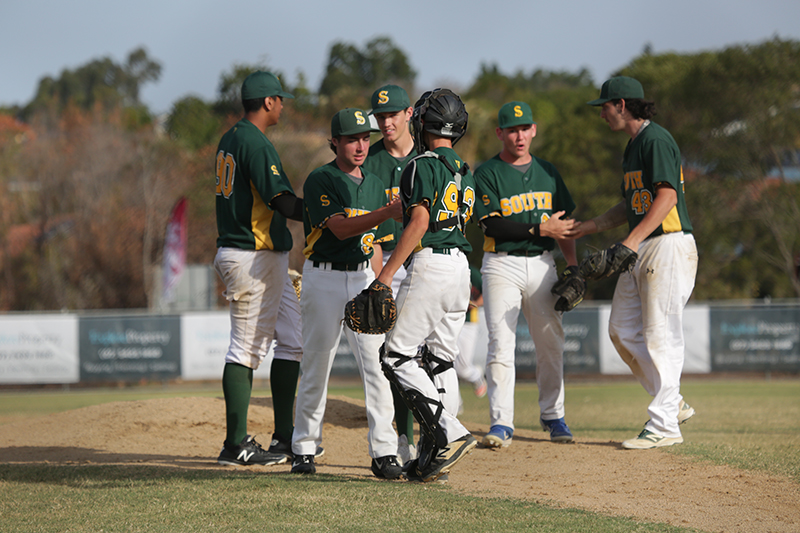 On behalf of BQ, I would like to thank the Narangba Demons Baseball Club, thier committee, volunteers and grounds crew for hosting the 2019 U18 State Titles.

Congratulations to the 2019 U18 State Titles winners; Brisbane South and to the Runners-up, Brisbane North.

END_OF_DOCUMENT_TOKEN_TO_BE_REPLACED 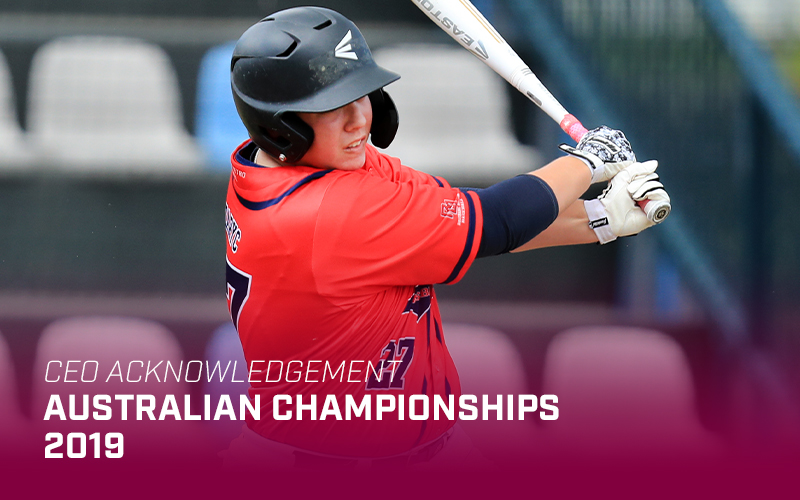 As CEO of Baseball Queensland and on behalf of the Board of Management, I would like to acknowledge the teams who have played at the 2019 Little League, Junior League and Senior League Nationals.

Congratulations to the players, coaches and staff for representing your regions and our state with passionate baseball, maximum effort and high-quality sportsmanship. We continue to hear reports that our young baseballers are held in high on and off the field and we are thrilled to see our teams grow in their knowledge of the game and compete at the national level.

Thank you to the parents who continually support their children to pursue their dreams of playing baseball throughout local, regional, state and national levels. Your dedication and sacrifice are always acknowledged and appreciated.

As CEO of Baseball Queensland, I am proud of all the players and teams who through our state titles tournaments have taken up the experience of playing at a national level and I am sure that these individuals will come back to their clubs with a deeper knowledge of the game and themselves.

Congratulations to Brisbane Metro for taking out the silver medal in the Australian Senior League Championships.

Congratulations to Gold Coast Cougars for placing 4th and to Brisbane Metro for placing 11th at the Australian Junior League Championships.

Congratulations to Gold Coast Cougars for placing 5th and to Brisbane North for placing 16th at the Australian Little League Championships.

Building a better future for baseball.

On behalf of Baseball Queensland, I would like to acknowledge Queensland’s Open Women’s team for their performance and competitiveness at the 2019 Australian Open Women’s Championships.

Through the collective efforts of all, including the coaching staff lead by Ms Lisa Norrie, you, the players, have shown great tenacity, discipline, and team spirit, and you have set a solid foundation for the future growth of women in Baseball in Queensland.

It is with great honour that we acknowledge your achievements, you have made us all Queensland proud!

As CEO of Baseball Queensland, a special thank you also to the coaches, staff, families, and players. You have represented Queensland well at this year’s Australian Open Women’s Championships.

“Building a Better Future for Baseball.”

On behalf of Baseball Queensland, I would like to acknowledge Queensland’s Youth Women’s team for their historic Silver medal win at this year’s Australian Youth Women’s Championships.

Through the collective efforts and sacrifices of the coaching staff lead by Mr. Geoff Wade, you the players and your parents, you have not only created history for women’s baseball in Queensland, but you have set a foundation for the future growth of women in Baseball.

It is with great honour that we acknowledge your historic milestone, you have made us all Queensland proud!

As CEO of Baseball Queensland, a special acknowledgement to the coaches, staff, parents and you, the young women who have represented Queensland at this year’s Australian Youth Women’s Championships.

“Building a Better Future for Baseball.” 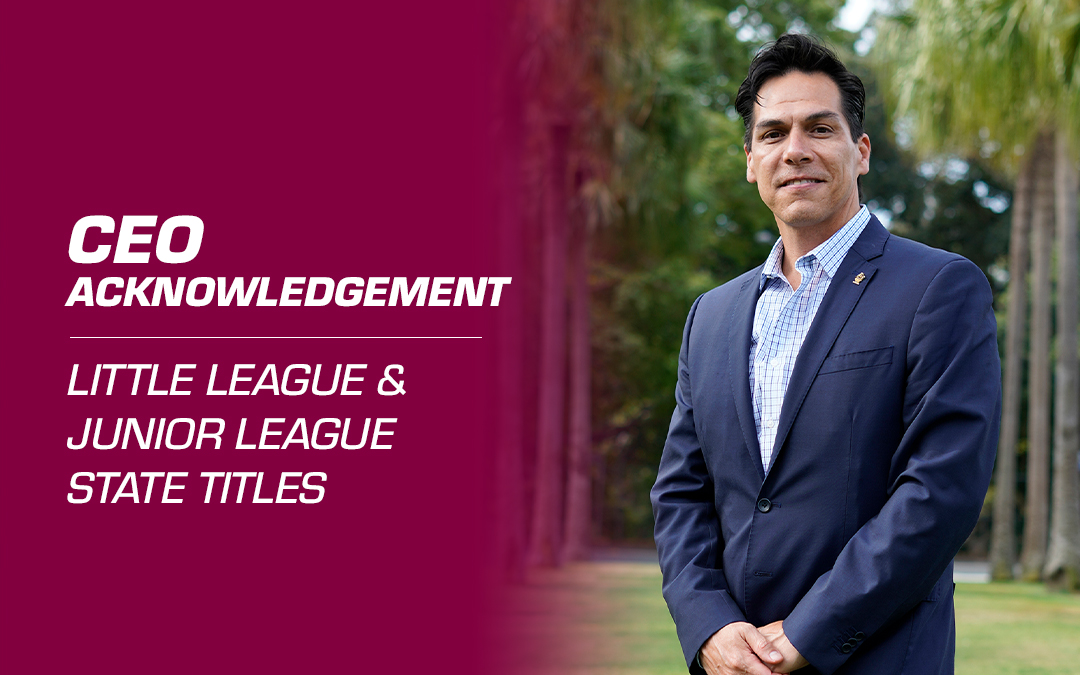 BQ wish to acknowledge the efforts of all the coaches, staff and teams that competed at this year’s State Titles.   The future of the game was represented well over the weekends by all our competitors.  Its’ strength was shown not only through the high-performance outcomes but also how the players/coaches worked together, competed, built relationships, respected the game and showed character throughout the competition.

The strategic pillars for Baseball Queensland are to Grow our People, Grow our Game, Grow our Brand & Grow our Business.  The 2019 State Titles saw the collective efforts of so many individuals within the Regions make contributions for positive outcomes for the sport.  BQ had team participation high’s with three (3) David Nilsson Little League teams, eight (8) Little League Div. 2 teams, five (5) Junior League Div. 1 teams, six (6) Junior League Div. 2 teams and two (2) Senior League teams to make up a total of twenty-four (24) teams. The tournament also had highs in female participation figures with over thirty-seven (37) girls of the three hundred and sixty-four (364) participants over the three State Title events.

BQ has seen continued growth within the four key pillars within the sport because of these efforts.  It has been BQ’s privilege to work with the individuals within the Regions, Clubs, Umpires, Scorekeepers and volunteers of this great game.  Through your collective approach for positive outcomes, Baseball watched twenty-four (24) teams, three-hundred & sixty-four (364) athletes and over one-hundred and eighty (180) staff/volunteers contributed to successful events.

Firstly, I would like to thank Rod Gaunt, President of Western Bulldogs Baseball Club, Sharon Teakle, President of Runcorn Indians Baseball Club, Andrew Gallpen, President Southern Stars Baseball Club and their committees for their tireless and selfless work and efforts in hosting the 2019 Baseball Queensland State Titles. There is no State Titles’ competition without quality individuals making decisions and putting in the countless hours of work behind the scenes. Thank you for your commitment, passion and efforts to enable BQ to host a successful event.

Secondly, I would like to thank our Regional and Club Presidents, committees, umpires, scorers, grounds crew, volunteers, parents and families. There is a multitude of people that work day in day out to ensure we have a quality competition for our competitors. Without you, the future of baseball doesn’t have an opportunity to develop and grow.  BQ recorded over one-hundred & eighty (180) staff and volunteers to support the success of each event.

Baseball Queensland’s State Titles are successful because of the passion of each individual and we acknowledge and thank you all for making our game great. As we continue to build a better future for baseball, we are continually reminded of the dedication of the individuals who play their part to build a great future for the player, club, region and state.  As CEO of Baseball Queensland, I am proud to be a part of an amazing group of individuals.  The collective efforts of the team will enable this game to not only remain sustainable but also grow into the future. 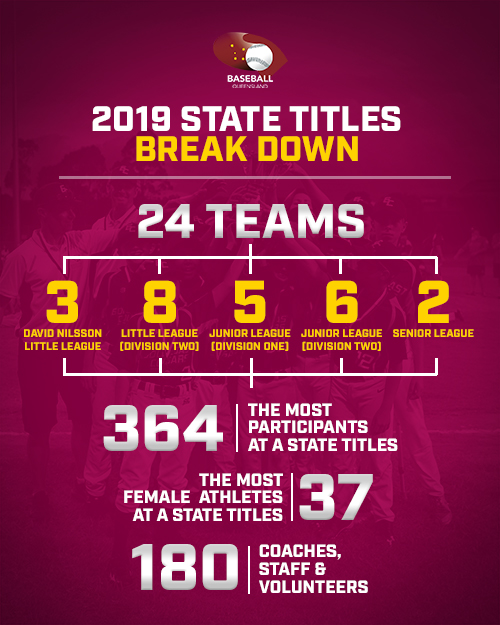