We can’t play the game without our mates.

Baseball Queensland and the Queensland Baseball Umpires Association (QBUA)  have been working on a new campaign to educate all baseballers, spectators and officials, with the aim of building a positive culture of actions between all.

Baseball Queensland would like to acknowledge the work that the QBUA has done over the last decade in improving the environment in order to attract new people to umpiring. We acknowledge that there has been fantastic development in the culture of baseball in Queensland. We would like acknowledged the QBUA for their effort and the strategies they have implemented and that this new campaign is shared, building on the foundation of the work that has been done by the QBUA.

The “Be a Mate” campaign aims to inform all people involved in baseball that:

The treatment of all people involved in baseball should be done with maximum empathy and respect.

–       It is essential we create an environment where people can learn to officiate in a safe and nurturing environment.

M: MAKE an effort, be mindful of your words.

Expanded: We know that at times what we see may not be what we think should be called by the umpire. We encourage all people to be mindful of the impact of their words. Negative words and acute criticism not only affects our umpires learning their craft, but the players and officials involved.

Expanded: Baseball as a sport has a proud tradition of how the game is officiated and the rules that govern the game. Our umpires, like our players, coaches, scorers and spectators are continually growing their skill set in not only their knowledge but how they communicate.

We ask all spectators that prior to making comment about a rule, to consider their thoughts from a “question first” mentality. This allows everyone to learn the game at their pace and minimize unnecessary criticism of the umpire whilst the game is being played.

We encourage you to ask someone next to you or someone with a deeper understanding of the game that isn’t involved on the field for clarification and understanding.

T: THANK the umpires after the game

Expanded: We can’t play without our mates. So regardless of what has transpired, ensure that as players, coaches and spectators we thank our officials (Umpires, Scorers, Coaches) at the end of the game.

E: ENCOURAGE everyone involved in the game.

Expanded: Both the QBUA and BQ want the culture that surrounds our game to be one where people feel they have the best opportunity to grow. We believe this can be achieved by not only encouraging our players but also our coaches, scorers and umpires. To be successful, the game of baseball needs us all and we aim to provide an atmosphere at our ballparks that has everyone involved feeling appreciated and encouraged.

“The “Be A Mate” campaign starts with a conscious effort from us all.  BQ will start with messaging through a digital launch campaign and will encourage all clubs and regions to support us in encouraging all our players, officials, and spectators to continue to build a better future for baseball, and grow in all aspects of the game.

Thank you all for all your continued support, best of luck in the 2019/20 season.” 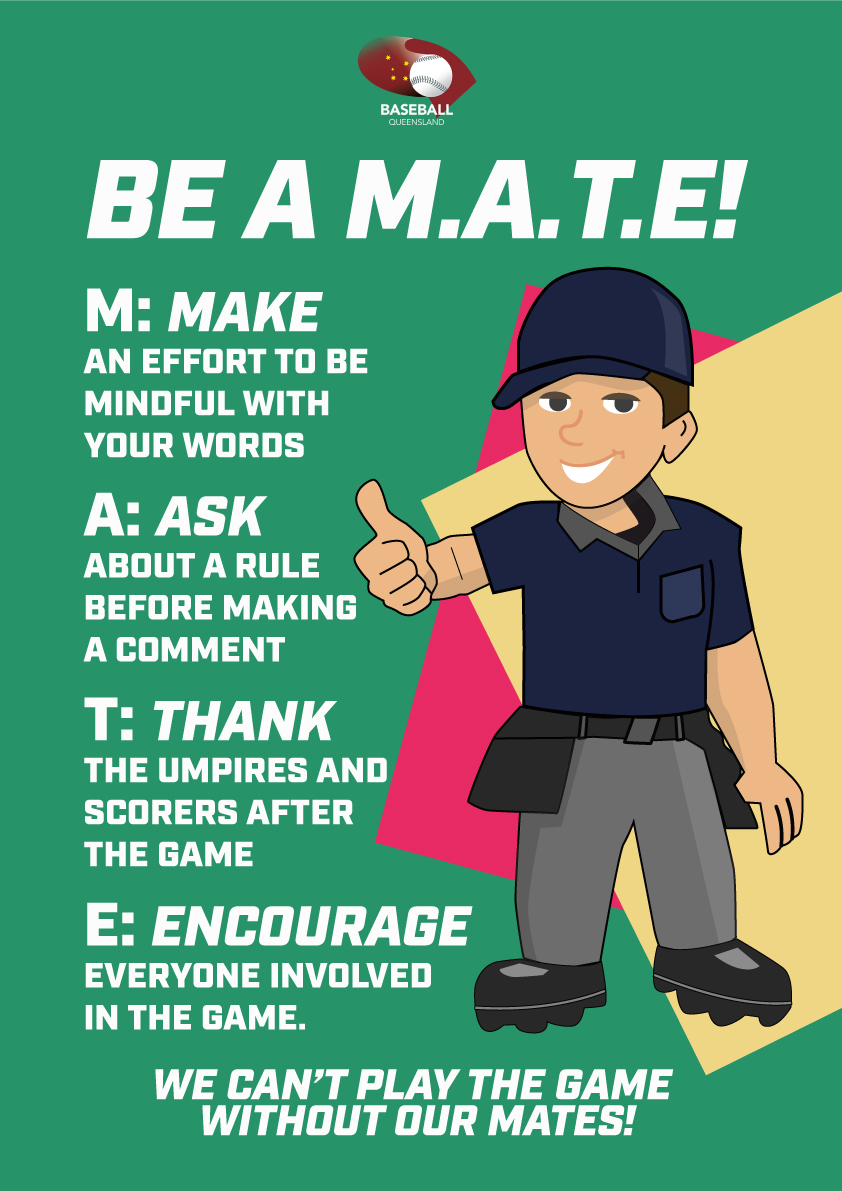